The Foundation of The Billion Press owes its existence in large part to the nurturing spirit of Mr. Savak Tarapore and his aspiration to help launch a news syndicate that would write with a focus on the common citizen of India. As he experimented with his own syndicate, through which he wrote during his later years for several newspapers, and particularly the Indian language media, the Foundation of The Billion Press took shape and form. In that sense, Mr. Tarapore is best remembered by us as the founder of this initiative. 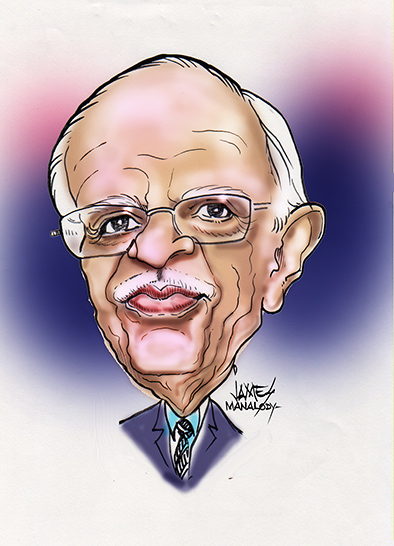 The other founders of the Foundation of The Billion Press are journalists Lekha Rattanani and Jagdish Rattanani, who worked with Mr. Tarapore, built on his suggestions and went on to launch the Foundation in March of 2016. What helped in the journey was not only the series of people Mr. Tarapore helped connect for the cause but also the experience of Mr. Tarapore as he worked his own syndicate, often in discussions with Jagdish Rattanani and later with Lekha Rattanani.

This was followed by some meetings at his home, where the warm and kindly Mrs.Farida Tarapore joked about how he was a stickler for his very own and strict sense of propriety and Mr. Tarapore poured out tea. Ideas firmed up several conversations later and the Foundation was born. The launch of the Foundation took more time. Mr. Tarapore suddenly passed away on Feb.02, 2016. He was 79. We formally began publishing under the banner of the Foundation about a month thereafter.

As he retired from the RBI in Sep. 1996, a speech in his honour by Ms. Usha Thorat (later Deputy Governor of the RBI and one of the writers for The Billion Press) quoted none other than E F Schumacher to describe the depth of Mr. Tarapore's work.

One passage Mr. Tarapore had himself quoted those days: "To everything  there is a reason  and a time  to every  purpose under heaven… a time to  cast away  stones and a time to gather stones together, or, as we might say, a time  for expansion and a time for consolidation. And the task of the wise man is to understand the great rhythms of the universe and to gear in with them."

Mrs. Thorat picked up another quote from Schumacher that suited the person and the occasion: "To have to grapple with divergent problems tends to be exhausting, worrying and wearisome. Hence, people try to avoid it and run away from it…. Convergent problems require a bit of brainwork, even difficult brainwork, but they do not call for this straining and stretching to a higher level which is the specific challenge of a divergent problem. It is only the latter that are real stuff of life."

Mr. Tarapore kept up a punishing schedule after retirement. As one of the many tributes in the media after he passed away noted: He was passionate about the interests of bank depositors and strongly engaged in advocacy to uphold the rights of the common person. He fought tirelessly for this, actively engaging with the All India Bank Depositors Association. He was on several committees and boards. His seminal contribution lay as a member of the Committee on Procedures and Performance Audit of Public Services (CPPAPS). This was the Committee that pointed out how banks often failed the common citizen.

Initial discussions were followed by some meetings at Mr. Tarapore's home, where the warm and kindly Mrs.Farida Tarapore joked about how he was a stickler for his very own and strict sense of propriety and Mr. Tarapore poured out tea. Ideas firmed up several conversations later and the Foundation was born.

He was of course a columnist with rare insight, clarity, depth and vision, all coming together so that complex issues of the Indian economy could be understood by ordinary readers. Never did his copy carry a word that you might strain to know or understand. Often, the temptation in the edit room was to promote Mr. Tarapore's copy to page one as a result. As one of editors working the pages those days put it: "Reading him is the only time I understand economics and the issues at stake. Not a word of jargon and full of common sense."

This website presents some of the columns he wrote as his Syndicate began. It also carries tributes published in various newspapers when he passed away. In many ways, this effort and initiative is also a tribute to Mr. Tarapore. He passed away essentially with journalistic credentials: He said he would not join the Board of The Billion Press because he was a writer and he would write for The Billion Press. Writers must be left free to write; anything else, he argued, was a conflict of interest!

He was of course a columnist with rare insight, clarity, depth and vision, all coming together so that complex issues of the Indian economy could be understood by ordinary readers. Never did his copy carry a word that you might strain to know or understand.