A global storm of stagflation

The global economy is suffering from twin shocks of a massive slowdown in economic growth accompanied by sharp and unprecedented elevation of inflation (see Table 1). This is the phenomenon of “stagflation”, a vice-like grip from which it is not always easy to emerge unscathed.

The concern about the current stagflation is fuelled by the stagflation risks experienced during the 1970s. Even though the fear of stagflation looms, the opinions on the associated risk of stagflation resulting in a global recession and successive financial crisis are divided.

While some experts have opined that the recent surge in inflation will be prolonged and leave a permanent scar on the global economy, others argue that the current state of stagflation is materially different from the 1970s. This is because many countries have taken recourse to inflation-fighting tools in terms of conduct of monetary policy with “inflation targeting” with the overarching objective of price stability. This is very different from what happened in the 1970s, when elevated inflation persisted and inflation expectations were de-anchored due to repeated shocks of inflation. On top of it, there was a protracted period of weak growth.

Inflation will linger, and the slowdown will worsen as the global economy moves in a disinflation glide path

Even though the monetary and fiscal policy process have been strengthened, there remains a fear that protracted high inflation will adversely impact global potential growth – the growth rate of the economy at full capacity utilisation.

Against the above backdrop of “gloomy and more uncertain” global economic prospects (as mentioned by IMF), it is imperative to address the following questions:

After the pandemic-related recessionary impact, global growth recovered in 2021 supported by unprecedented fiscal and monetary policy accommodation. However, there was rapid slowdown in economic growth due to weak growth in the US (fading of pent-up demand and the withdrawal of monetary policy accommodation amid high inflation), China (Covid-19 lockdown due to a policy of zero tolerance for Covid infections) and Russia (the war in Ukraine).

The surge in inflation rates across the globe is of a kind not seen in the last half a century, which is adversely impacting real disposable income and dampening business sentiment.

Furthermore, a benign inflation rate has translated into a malignant one because of the protracted war in Ukraine, resulting in soaring energy and food prices. The war has disrupted the distribution of basic food and energy and fuelled higher inflation. According to the World Bank Report June 2022, “While demand shocks were the dominant force in pushing inflation down in the first half of 2020, oil price shocks and supply shocks have become more influential in pushing inflation up since early 2021, especially for core inflation and CPI in advanced economies.” Currently, as the World Bank Report for July 2022 has observed, all advanced economies and 90% of emerging markets and developing economies are above their inflation targets.

Policy makers are thus trapped between the twin blades of the scissor of stagflation– i.e. high inflation and low growth. In response to high inflation, most of the central banks have taken recourse to monetary tightening to control inflation and anchor inflation expectations. As a result, policy rates have moved up significantly (see Table 2). It is expected that more tightening may be on the way.

The monetary tightening actions of the central banks will eventually put these economies on a disinflation glide path. The IMF’s World Economic Outlook (WEO) July 2022 update has observed that the disinflation adjustment could be more disruptive than expected. The WEO update notes that in a number of advanced economies, rising interest rates together with low growth will worsen the debt dynamics and increase sovereign and corporate spreads especially in high debt countries. The widespread capital flight from emerging markets and developing economies (EMDE) would put pressure on international reserves and cause depreciation of their currencies. Furthermore, trade restrictions due to the lingering war in Ukraine may adversely contribute to world food inflation. It is important to note that currently fiscal space is almost absent both in advanced economies and EMDEs so the fiscal policy interventions to address growth is limited.

This tells us that controlling global recession at this juncture is not a simple task of addressing aggregate demand with higher interest rates. The President of the World Bank, David Malpass, in his foreword in the Global Economic Prospects June 2022, observed: “Even if a global recession is averted, the pain of stagflation could persist for several years – unless major supply increases are set in motion.”  He suggested that “reducing the risk of stagflation will require targeted and impactful measures by policymakers across the world.” The policy measures are more structural in nature which includes streamlining business regulation, encouraging green investments and digitalisation.

In this context, it is appropriate for world policymakers and political leaders to pay focused attention to the suggestions by David Malpass in the following five key areas: (a) delivery of emergency food, medical and financial aid to those affected by the Ukraine war; (b) avoiding export and import restrictions to counter the spike in oil and food prices; (c) stepping up debt relief efforts; (d) expanding Covid-19 vaccination coverage; and (e) speeding the transition to low carbon energy sources with new frameworks and incentive structures.

In sum, even though the current stagflation is in many respects different from the stagflation of 1970s, the war in Ukraine and the consequent sanctions on Russia have de-globalised trade. Elevated inflation, particularly in food and fuel, will stay for a longer period. Growth slowdown will be further aggravated as the global economy will move in a disinflation glide path due to monetary policy tightening. In the absence of fiscal space, fiscal policy intervention will remain limited. As a result, stagflation may well be a prolonged phenomenon. 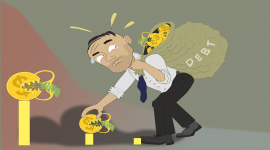 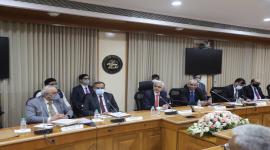 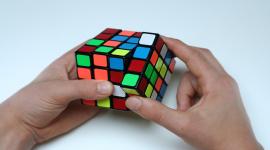