The herd instincts of Indian business

After a firestorm over the article in the RSS-aligned Panchjanya magazine that called Infosys anti-national, the RSS has come out to formally disassociate itself from the remarks and added for good measure that the magazine is not its organ. Political messaging works best when it is straightforward and simple, so a blunt attack and a tactical retreat are as much in good stead as is the equally blunt counter from the Congress that calling Infosys anti-national (for delays and breakdowns in the income tax portal executed by Infosys) is in itself an anti-national act.

While this sparring goes on, no one need miss the silence, even surrender, of what is euphemistically called India Inc., the one on whose shoulders the RSS-BJP have placed much hope to take the nation forward – from a would-be revolutionising of farmlands through the massive privatisation enabled by the new farm laws to the big “asset monetisation” that is now in the headlines. These corporate biggies, the government appears to believe, have the muscle, the money, the drive and the belief to put India on a bold new path, with the added advantage of having neither any political ambition nor a protestor’s voice. They are safe bets to rely on. They prefer, it seems, backrooms where deals are done, accommodation is provided and business flowers.

Can such a business sector provide the vigour, the vibrancy and the innovation required to make India a private sector-led powerhouse of the future?

This is the not-so-pretty picture of business in India three decades after liberalisation, the so-called new dawn for a nation that broke away, at last, from the license-permit-quota Raj in 1991. How much really has changed, we may ask, from the time Nehru talked of the ‘jhoot’ press because it was largely linked to the then jute magnets and their narrow interests, to the time when Indira Gandhi perfected the art of collecting money and also putting businessmen in their place, to today when no one will dare speak-up even when an iconic company and its iconic founders have been linked, well almost, to the so-called ‘tukde-tukde’ “gang”. The story then is Infosys is out to break the nation that other businesses have wowed to build. While the target this time is Infosys, let there be no doubt that they are in the same boat as others – silence is golden and the rest is business as usual!

The question to ask is can such a business sector provide the vigour, the vibrancy and the innovation required to make India a private sector-led powerhouse of the future. Surely, one important ingredient is developing the art and skill and courage of asking tough questions, and this is a package that is either encouraged or discouraged. In India, it is the latter, as much in business as it is in the Indian way of life, and this puts its own brakes on what business models so fashioned can deliver at a time of intense, even unprecedented, change. If this is the central make up of a leadership, then the entire eco-system is being led by not business leaders who can stand upright but a bunch of interests and moneybags that are entrenched, familiar and familial, all equipped to play safe in their personal interests, not bold in the public interest.

If this is the central make up of a leadership, then the entire eco-system is being led by not business leaders who can stand upright but a bunch of interests and moneybags that are entrenched, familiar and familial, all equipped to play safe in their personal interests, not bold in the public interest.

In fact, while there are many honorable exceptions, the bulk of business is feared to be of the kind that actively discourages questioning within the business itself. Like it or not, many still run internally like the BJP of today! It is not surprising then that India with its largest supply of engineers in the world is (largely) a nation of testers and coders, world class even if they are, moving up the value chain only slowly, not a nation of innovators who can dazzle with their dream products and services.

This isn’t the stuff tomorrow’s businesses will be built of. It isn’t the path to sustainable growth, to new models or to meeting the needs of India’s vast majority, many of them still living in poor conditions and with meagre incomes.  Not asking questions is but one side of the story of subservience. The other side is the bribery and chicanery we saw when controls went loose and deals of all manner were signed leading to short-term growth and a long-term crunch that left the banks with a pile of non-performing assets (NPAs) that at one point crossed Rs.10 lakh crores. For comparison, the current “asset monetisation” plan is touted to fetch Rs. 6 lakh crores. So, all in all, this paints a dismal picture of the state of our businesses. Not all are of this variety but the big picture would paint the entire class in some unfavourable light.

Of course, there is the case that this government is particularly vengeful and it is best not to speak out and land in trouble. There is merit in that argument, except that acquiescence, silence and mute spectatorship is the lot that has characterised business play across all governments in India, not just this one and its sharper dictatorial bent.

Can bold moves come from someone with a bent spine? That is one reason why we may continue to live with herd instincts, not animal spirits.

This unfavourable image of business is seeped into the Indian mindset as well. Consider that farmers are protesting not to privatise ‘mandis’, among other things, saying they have no faith in the private operator who is slated to take over. It is the same thinking that drives a section of Indians even today to prefer the safety of a government job, and the agitation for more caste-based reservations in government jobs, which, on the whole, should be declining if government is to hire less, become more efficient and the private sector is to truly blossom.

There is of course no doubt that the business class has played a part in the building of India. It will be required to play an even bigger part tomorrow. For this, we do not need businesses that dabble in politics or oppose elected governments but we do need businesses that stand up for something larger than self-aggrandisement. We do not need businesses that, as is historically recorded, “made their fortunes under Pax Britannica and there was a feeling of gratitude for the British” (Business & Politics in India: A Historical Perspective, quoting the business historian Dr. Gita Piramal) but we do need those who stand for the ideals of Gandhi and his vision for the poorest Indian.

It is also true that we need the firing of “animal spirits” that the finance minister Ms. Nirmala Sitharaman spoke of earlier in the year, inviting investments to drive India back to the path of high growth. Her call was for marching ahead, exploring and investing boldly based on intuition, optimism and the belief in India’s destiny. But can bold moves come from someone with a bent spine? That is one reason why we may continue to live with herd instincts, not animal spirits. 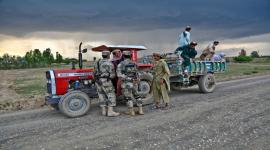 Dealing with the Taliban
The developments in Afghanistan send out many complex messages but the one that is not in doubt is... 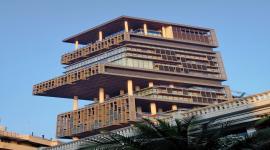 A break-in that shames and endangers India
The argument that the data from this act of illegal snooping was available not to the Israeli...

Climate crisis and rights of the child
Save those who have been termed ‘climate deniers,’ it is generally acknowledged that the climate...