The idea of India

Let me begin this piece by reiterating a personal experience. Some years back, in an interactive session with students of a school in Delhi, a youngster asked me: “Why do some of the young people in your books have such funny sounding names?” He certainly had a point --- names such as Thenyak, Changun and Grandma Kamlong in my book The Crystal Cave published by the National Book Trust, India, or Chowkongpen and Chowtapan in Revenge published by Children’s Book Trust, New Delhi, not to mention the Hupeks, Yuriancys and Dhanais who traipse through some of my books for young adults, might sound somewhat strange and alien to the ears of an urban child from North India.

Yet these are as much a part of the pan-Indian mosaic of names as, say, the Amitabhs and Shah Rukhs more familiar to that curiosity filled youngster. I had to explain to him that, for instance, Thenyak, Changun and Grandma Kamlong in The Crystal Cave belonged to the Nocte tribe who lived in the far off, beautiful State of Arunachal, a region which, despite its enormous cultural and ethnic differences with other parts of India, flaunts its “Indian-ness” as proudly as those located elsewhere.

Arunachal, for instance, has over a hundred disparate tribal communities which have evolved independently through the centuries and thus have distinctive differences of culture and dialect. Other regions in India may not possess such extreme diversity, yet it can be safely stated that few areas in our nation display absolute cultural homogeneity.

This brings me to the heart of the matter --- the term “India” enfolds within its ambit a mind-boggling diversity --- the metaphor that readily comes to mind is of a gigantic and intricate web. Countless individual strands link together to make that web, yet the image presented is of oneness. The ethnic, cultural, religious and linguistic multiplicity is not only at the macro-level, but at the tiniest micro-level. Arunachal, for instance, has over a hundred disparate tribal communities which have evolved independently through the centuries and thus have distinctive differences of culture and dialect. Other regions in India may not possess such extreme diversity, yet it can be safely stated that few areas in our nation display absolute cultural homogeneity.

Though a broad, common swath of history might have draped the entire sub-continent, each individual strand carries its own weight of history, thereby making for a colourful and intricate past for historians to delve into. India through millennia has been a meeting place of so many races, cultures and religions --- it is a composite ethnological warehouse of people of Caucasoid, Dravidian, Austro-Asiatic and Mongoloid origins --- the Dravidian merging with the Aryan, the Austric-Mongoloid taking in the Dravidian and Aryan and fusing into a unique amalgam to create a convolute ethnic and socio-cultural scenario.

The broader Indian society drew all such faiths into the societal fabric, creating the ‘Idea of India,” an ennobling amalgam of global faiths which for centuries evolved and intermixed while exhibiting an astonishing degree of tolerance.

While North India was awash with periodic, overland ethnic cultural streams, the South was touched with similar waves which surged across the seas; in the North-East India elements from China, Indo-China, Tibet and Myanmar impinged upon the sub-stratum, thereby bringing about a cultural complexity not to be met with anywhere else. One must note India today has twenty two official languages and a plethora of dialects, each with a literary tradition.

Equally pertinent, India has been the meeting point of almost each and every religion in the world, including Hinduism with its various offshoots such as Jainism, Buddhism, Sikhism, and major faiths such as Islam, Christianity, Judaism, Zoroastrianism, and so on. The broader Indian society drew all such faiths into the societal fabric, creating the ‘Idea of India,” an ennobling amalgam of global faiths which for centuries evolved and intermixed while exhibiting an astonishing degree of tolerance. It may be recalled that when imperialism intruded and colonised India, reducing its native population into second class citizens deprived of rights and liberty, the nation rose up as one to fight against the British.

For instance, in the 1857 Sepoy Mutiny, today termed as India’s first war of independence, Muslims fought side by side with Hindus in a titanic endeavour to wrest freedom. Similarly, during the Freedom Movement led by Mahatma Gandhi, Muslims were as much in the forefront as their Hindu counterparts.

An environment has deliberately been created to enable those divisive elements to creep out of the woodwork and begin infesting the societal fabric.

It, indeed, is an unimaginably rich tapestry of communities, religions, customs, cultures and languages which the abstract entity called “India” represents, a fascinating kaleidoscope of diverse flora and fauna, myriad must-visit places of interest in remote areas, culinary arts, music and dance forms, forts and palaces, animals, birds, street games, mountains, rivers, industries, social workers, scientists, artists, and, above all, people! Issues such as the progress in strengthening our democratic mechanism, renewing efforts at inducing a secular mentality among the new generation even as we strive towards egalitarianism and gender equality, environmental degradation, problems confronted by the deprived child, all these and more should be at the core of our preoccupations if we are to remain true to “the Idea of India.”

Yet, of late, we appear to be going against all the ideals and principles this idea encompasses! Divisive elements are having a field day, attempting to fracture society on caste, communal and ethnic lines, with those in the seats of power not doing enough to rein in these insidious elements. Such divisive forces had appeared in the scene during the independence movement itself, which in turn led to the two nation concept and later to the partition of the sub-continent and all the horror which ensued.

It might have been thought that seven decades should have been enough for the broader society to have overcome those developments and focus on issues which really matter and implement measures which can usher in progress and better quality of life for the people. Yet, today, on the contrary, an environment has deliberately been created to enable those divisive elements which had been lurking in the nether world to creep out of the woodwork and begin infesting the societal fabric. The tragic outcome of their divisive tactics have been episodes such as the communal riots in Delhi where scores of lives were lost, hundreds were injured, shops and homes burned and scars inflicted on the collective psyche which will take long to heal!

Not only on the political plane, but bigotry seems to have penetrated into our religious institutions also and the very establishments which should have championed our tradition of openness and tolerance are acting in an opposite manner.

Till now I had considered myself fortunate that I was born in North-East India where bigotry and discrimination on grounds of religion or caste did not exist. Our childhoods were idyllic ones and we grew up in a community which displayed a truly egalitarian ethos. Given the ethnic and religious admixture which comprised the society of those days in Assam I can confidently assert that it was an authentic representation of the Idea of India.

Unfortunately, this is no longer true. Divisive elements have penetrated into our milieu too and are trying to destroy the age old religious harmony which has been the hallmark of the society of this region. Not only on the political plane, but bigotry seems to have penetrated into our religious institutions also and the very establishments which should have championed our tradition of openness and tolerance are acting in an opposite manner.

Today, at the national level, we appear to have become strangers to the vision of Mahatma Gandhi of an equitable and egalitarian society, while at the regional stratum we seem to pay only lip-service to the teachings of the great Assamese saint Mahapurush Sankardev.

Yes, some nefarious elements in contemporary times, backed by rabid communalists and hate mongers, are trying their best to besmirch the Idea of India, and undermine the notions of plurality and inclusiveness it implies. In doing so they are, in the words of the Freedom of the World 2020 report, serving to “blur the value-based distinction between Beijing and New Delhi.” It would indeed be tragic if, after over half a century of endeavour to further our constitutional objectives and strengthen our democratic institutions, the biggest “democracy” in the world allows the idea on which it was founded to be obscured!

(Padma Shri Arup Kumar Dutta, a prominent social historian and writer based in Guwahati, is the author of some 35 books, among them The Kaziranga Trail and The Ahoms) 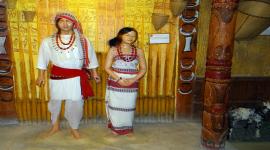 The wages of ignorance
The people of North-East India have been, in numerous ways, paying the price for geopolitical...