Why it’s time to turn to Gandhi

Gandhi lived in a time when technology, science, education and energy were reshaping economic growth and world war outcomes. US and Europe reeled under the Great Depression (1929 to 1941) with the collapse of the manufacturing segment and housing in the US. Actions that led to this crash were familiar: protective import tariff, credit driven consumption and consumption reaching a saturation point. Post-crash international trade, banking, housing, wealth, employment and prices were adversely affected. Wall Street left its devastation on Main Street; the economics determined the politics of the time. The government had to intervene to provide employment on a large scale. This experience firmly grounded the rationale of economists for aggregate demand, which has become central to the economic policy of nations to this day and determined the shape of the politics that has come in its wake.

Colonial India too faced many constraints during the Great Depression. High taxes, rising prices, shortages and the collapse of the agricultural sector were the order of the day. Gandhi firmed up his economic concepts in the context of this economic downturn, which also informed his political agenda. His politics was inspired. Now, the world is again grappling with a continuing economic crisis in the wake of the 2008 global crash. It may be useful to mull over Gandhi’s framework and the political choices this might entail to address the concerns of today.

The uniqueness of Gandhi’s approach was the inter-twining of economic concepts with social, political (self-governance) and personal experiments with truth. This perspective renders them somewhat distinctive and at the same time difficult to translate into tangible policy options. Gandhian concepts that may be considered relevant in the current geopolitical, economic, societal and environmental context entail a focus on (a) non-violence principled transactions, (b) labour, rural self-reliance and (c) inter-generational stewardship. His ideas and his resistance took root from this soil.

So, for Gandhi, the reality of inequality, say between rich and poor, cities and villages, educated and illiterate, men and women, upper and lower castes, developed and developing nations, was a major concern. Gandhi believed in the individual's ability to choose the most appropriate actions for the wellbeing of everyone. The independence movement provided the evidence that collectivism, cooperation, non-violence, and choosing simplicity were possible at the individual level. Therefore, for Gandhi, the political economic approach that relied on the individual's ability to choose freely and act for collective well-being formed the basis of his message.

The uniqueness of Gandhi’s approach was the inter-twining of economic concepts with social, political (self-governance) and personal experiments with truth. This perspective renders them somewhat distinctive and at the same time difficult to translate into tangible policy options. Gandhian concepts that may be considered relevant entail a focus on (a) non-violence principled transactions, (b) labour, rural self-reliance and (c) inter-generational stewardship.

The limitation of Gandhi’s economic framework is that it left out two key segments, that is the private sector and government. These two have remained mere spectators or admirers of Gandhi as a phenomenon and various actions he propounded. Never was there a consideration by these two stakeholders in considering Gandhi's political or economic options.

Today, we know that the golden age of capitalism is at an end. With it will end surplus employment and shared prosperity in rich economies. The driving factors of perpetual economic growth - increasing productivity per work hours – have taken over focusing on supply side efficiency.  To sustain such a system, consumption needs to be increased. Demand side inefficiency drives such super consumption levels. So, the simplicity proposed by Gandhi, which would negatively impact super consumption trends, cannot be factored in such inefficient systems.

Perhaps there is another way around. That is bringing back the era of golden capitalism with a difference. Putting to use the concentrated wealth to reverse or preserve conditions as they were at the turn of this century. That is balancing supply and demand side efficiency with appropriate information, understanding and wisdom. This would require many personas like Gandhi, young and old, rich and poor, men and women, and countries adopting certain universal values Gandhi proposed. These universal values are simple living, the concept of stewardship, and localisation of wellbeing. The world may have to embrace concepts like give as per your ability, take as per your need, and care for the planet (every being). The question is, are we as responsible individuals, willing to consider this and collectively shape our economic and political future? 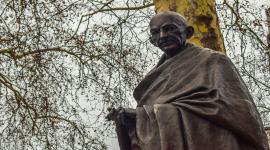 Why it’s time to turn to Gandhi
Gandhi lived in a time when technology, science, education and energy were reshaping economic...